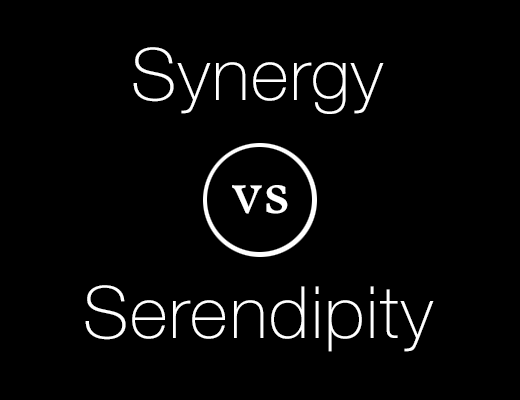 There are few words that have been so battered as synergy, or so freely interpreted as serendipity.

Nevertheless, their real meaning and the difference between them matters.

Let’s take aside scientific acceptations, less ductile, and enter the volatile world of business jargon. You’ll often hear “We should have a meeting to explore synergies”. This is a way to mean “Can we find a way to make business together?”.

Also, project managers use to be told “Try to find synergies with such and such similar projects”. This really means “Try to reuse a powerpoint, or code, design, whatever make us save some money”.

Actually, real meaning of synergy in this context was developed by Richard Buckminster Fuller:

“Synergy means behavior of whole systems unpredicted by the behavior of their parts taken separately.” –Source

So, synergy is a phenomenon happening because of the interaction of the parts of a system. Not among different systems.

Neither can be decided, accorded or predicted. The most you can do is model a type of interaction or communication that fosters beneficial results for all parts.

And considering synergy as a kind of energy transplantable from one project to another… Well, best-case scenario is a wide-eye ignorance, and more commonly, a cheeky euphemism.

Famously coinend by Horace Walpole, is the phenomenon that happens when we are looking for a result or knowledge, and we find instead something different and unexpected, but really worthy.

Typical examples are the discovering of penicillin, the Post-It, etc.

Serendipity is not equal to luck. You need to be actively searching for something new, not running business as usual.

Synergy is an unexpected behavior, potentially valuable, that members of a system have found during one or many interactions.

Serendipity is an unexpected and valuable result, obtained by an entity from its subject of matter, while looking for a different thing.

Why the difference matters

Synergy can’t be found or evaluated before the interaction that sparks it.

Serendipity happens, but you need to be attentive to recognize it.

By continuing to use the site, you agree to the use of cookies. more information